Today’s experience was an easy #3 among the most dangerous things I’ve done during my travels. Number 1 is the time I took a crazy Indian bus ride through the Himalayas from Shimla to Manali.  Let me tell you, the road was NOT made for 2 cars, let alone a giant bus. Number 2 was climbing Pacaya volcano in the fog and rain, with no safety measures in place to prevent people from falling.

To help us choose the right bus to travel between Phnom Penh and Ho Chi Minh City, David found a review of the options online. One of the recommended “luxury” ones was Sapaco Tourist. But before booking, I decided to look at additional reviews just to be sure. The reviews I found were negative and as a result, I no longer wanted to book with Sapaco. Unfortunately, the other companies (like the Mekong Express) were booked, and the only option left was to take Sapaco.

While the advertisements showed that the bus was new, had AC, TV and a toilet on board, the bus we boarded was rickety and the two seats assigned to us weren’t bolted down and jolted forward whenever the driver stepped on the break. Not fun, especially if you’re trying to sleep. The driver was also driving extremely fast with a number of hard breaks to avoid hitting on-coming traffic (he was driving in the wrong lane most of the time) so it was pretty uncomfortable. What was of greater concern though was when the bus suddenly stopped in front of a river. Yes, a river. At first we thought it was a bathroom break since we were surrounded by snack vendors. It wasn’t. In fact, the bus started to move towards the river and found its way on to a ferry.  Mind you, the bus did not have any emergency exits so if we did sink, we were….sunk. So we did the only thing we could do, we got off bus so if it did capsize, we could at least swim. I even stuffed money down my shirt as an additional precaution in case we lost our luggage. The driver seemed puzzled why we were getting off and tried hard to get us back on before we arrived at the other side. Luckily the ferry ride was over quicker than we anticipated. We jumped back on and were off again. Phew. 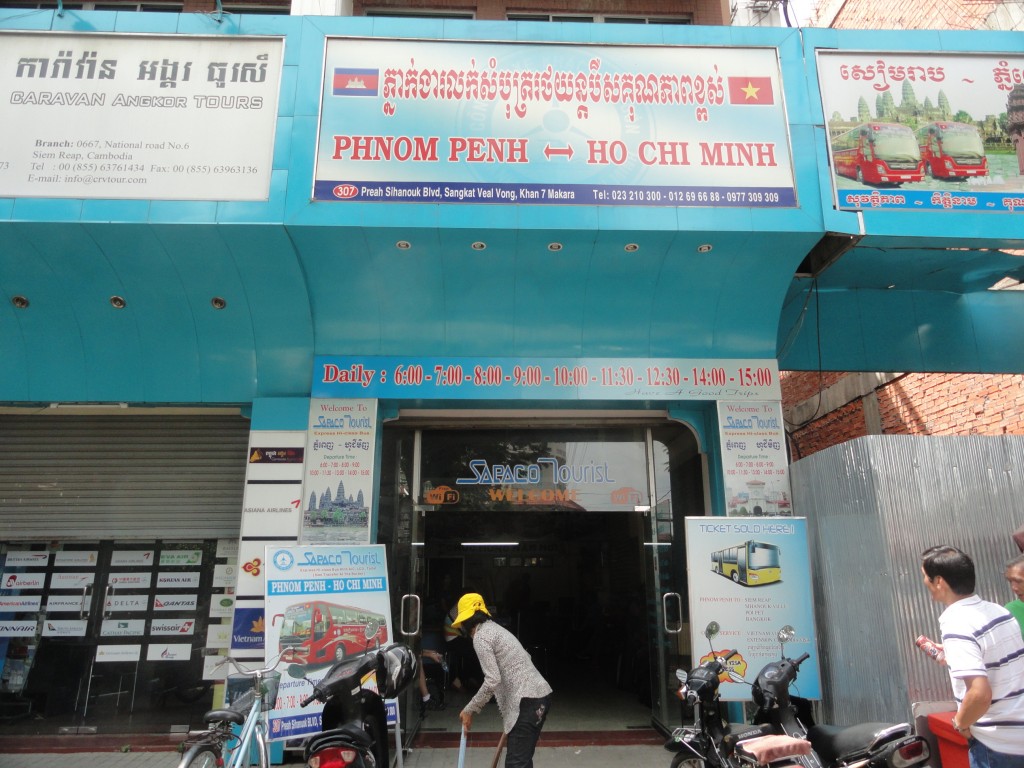 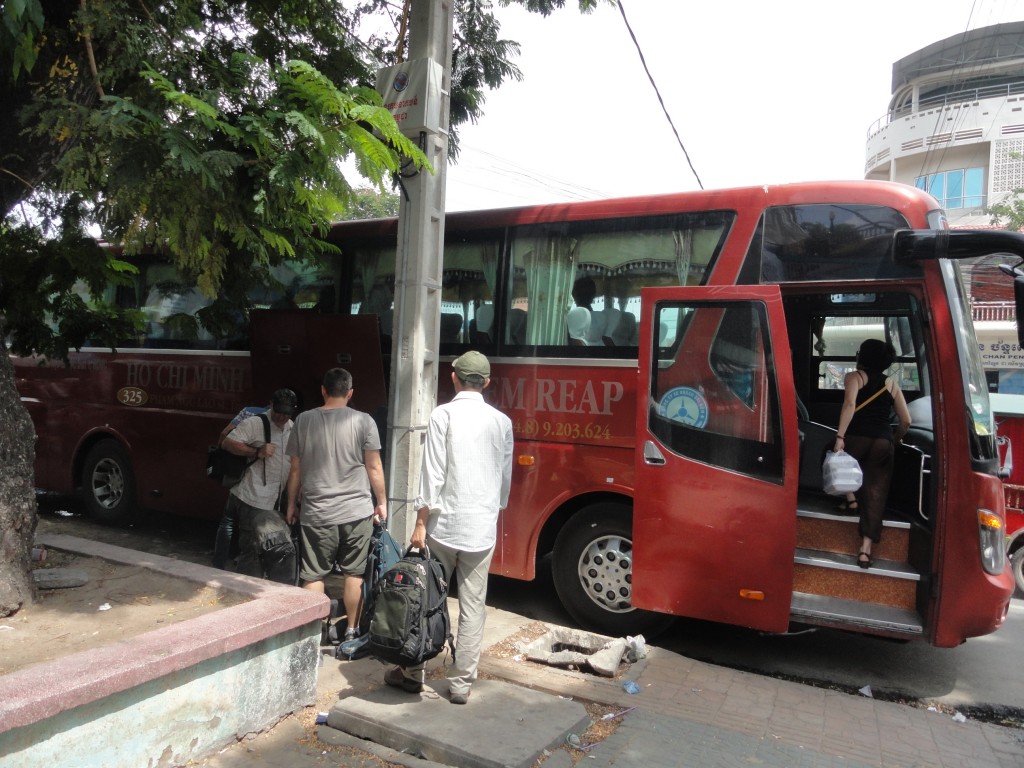 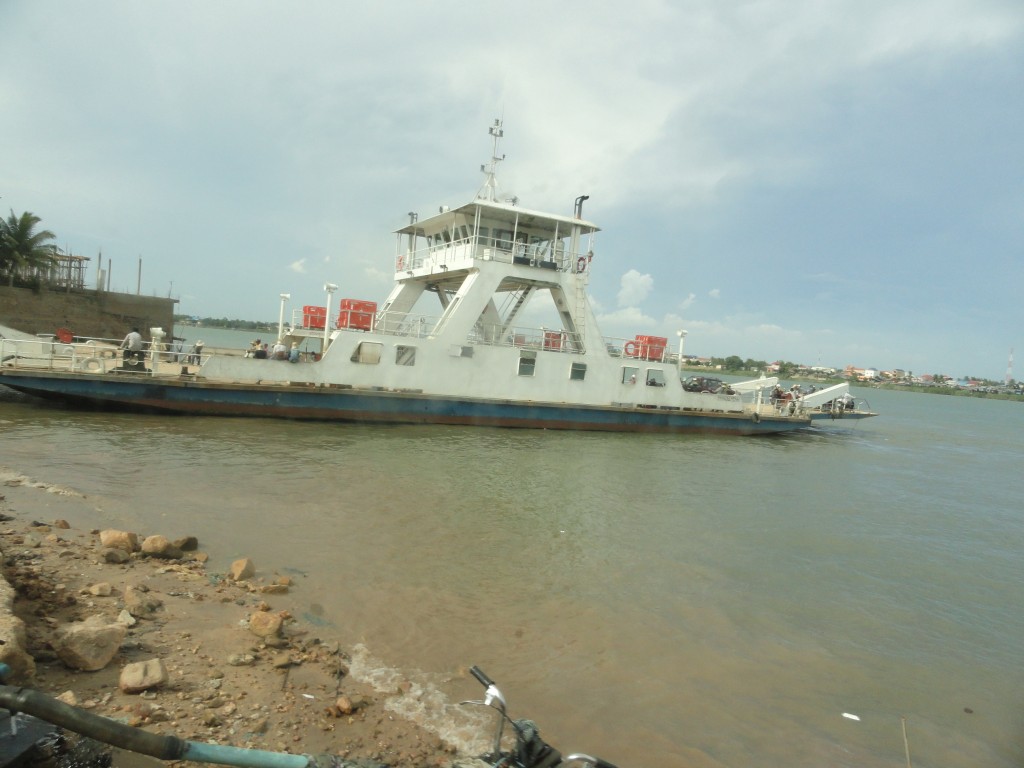 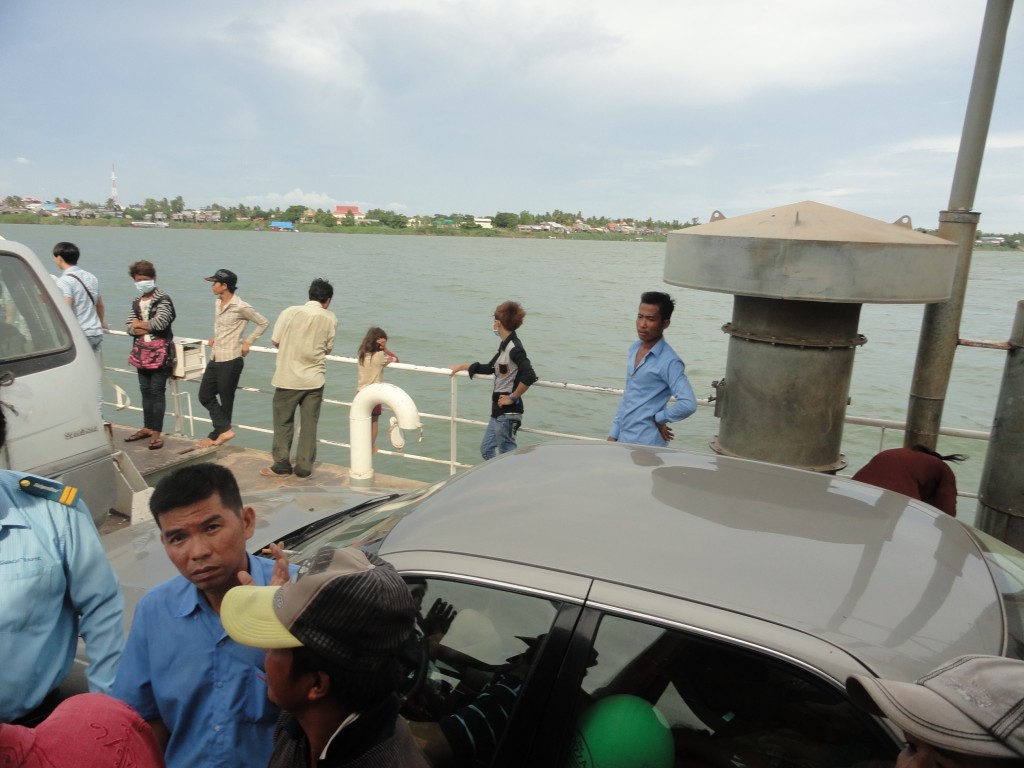 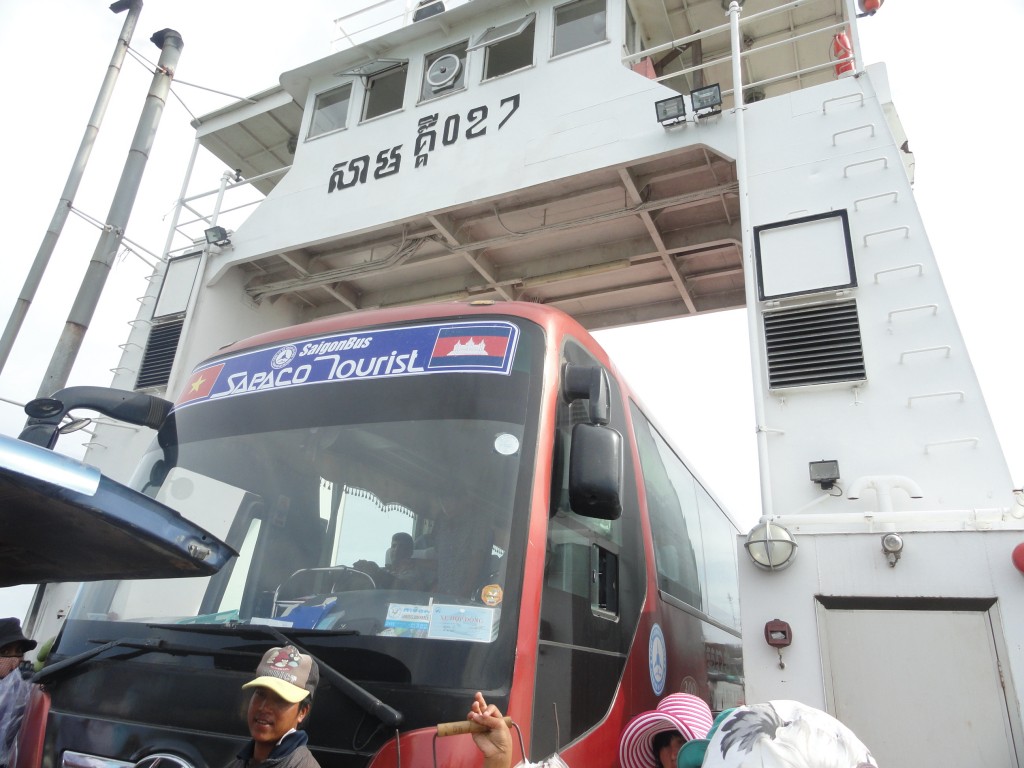 Bus on the ferry. 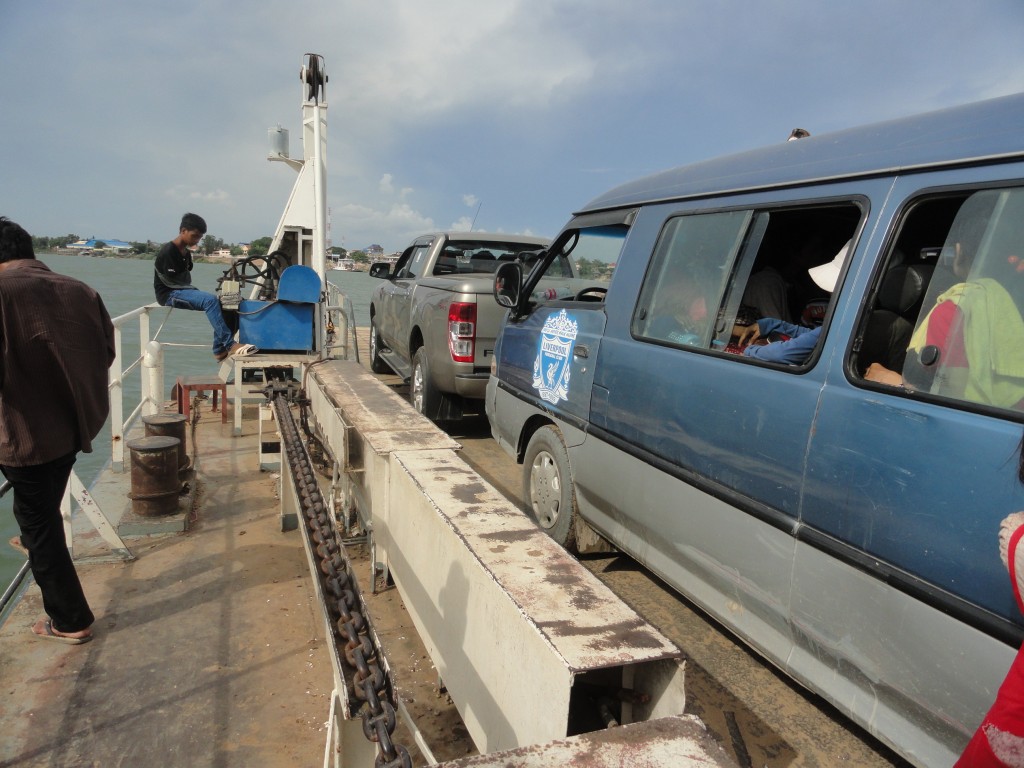 Various other vehicles on the ferry. 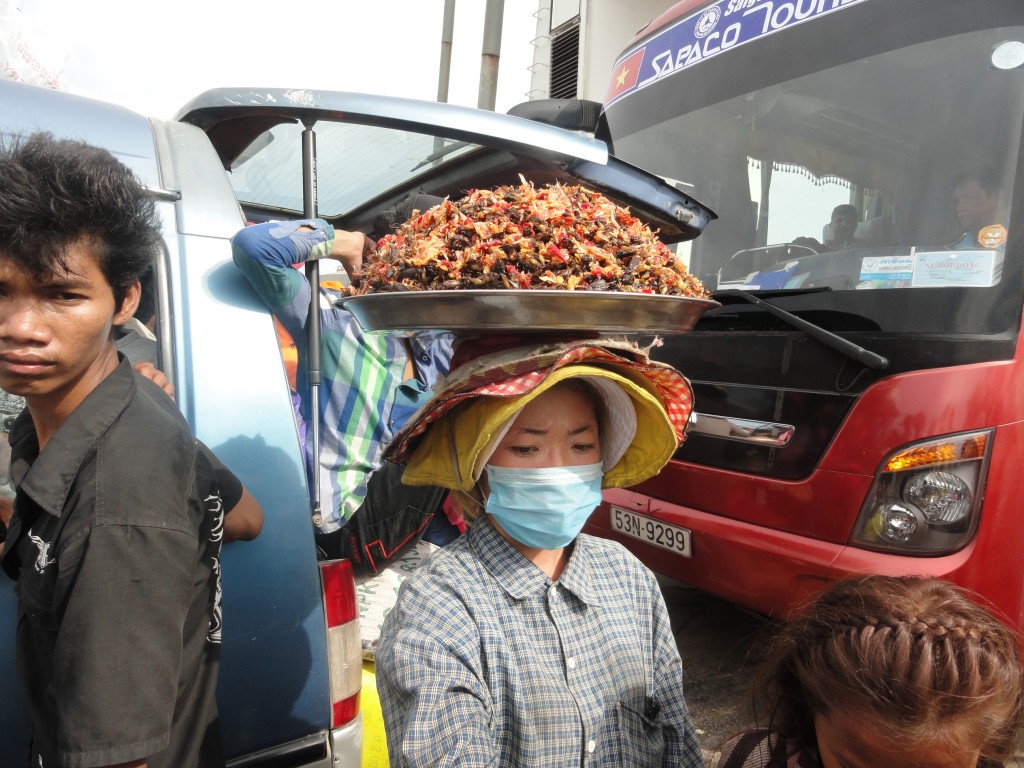 A lady selling bugs as snacks on the ferry. 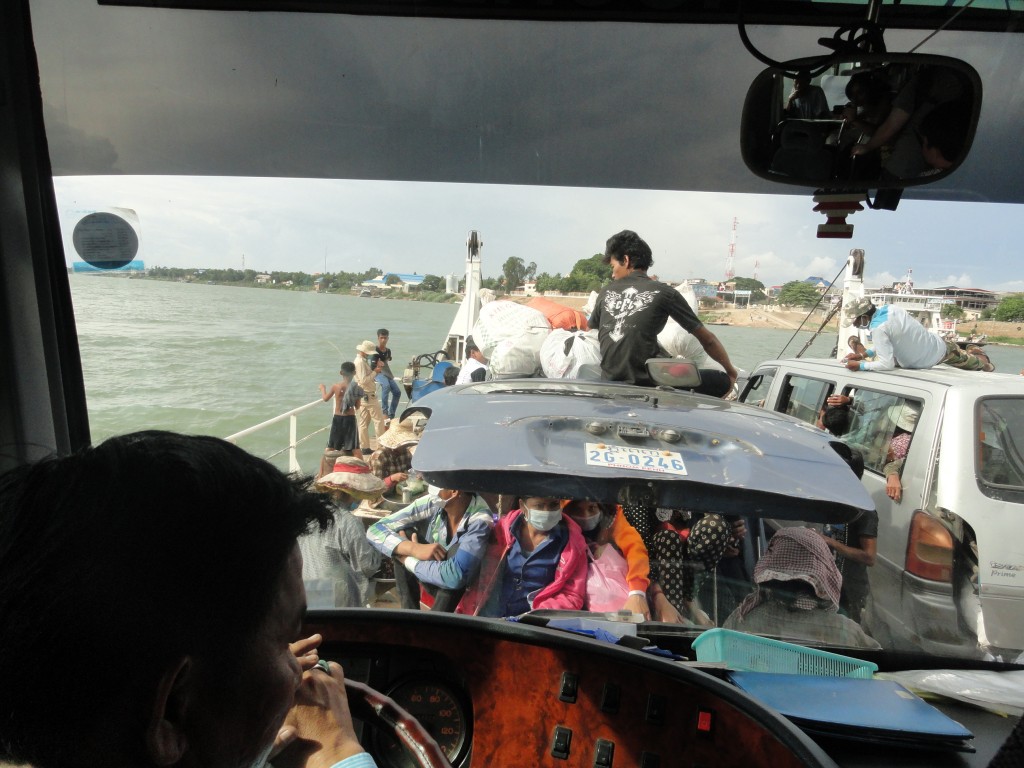 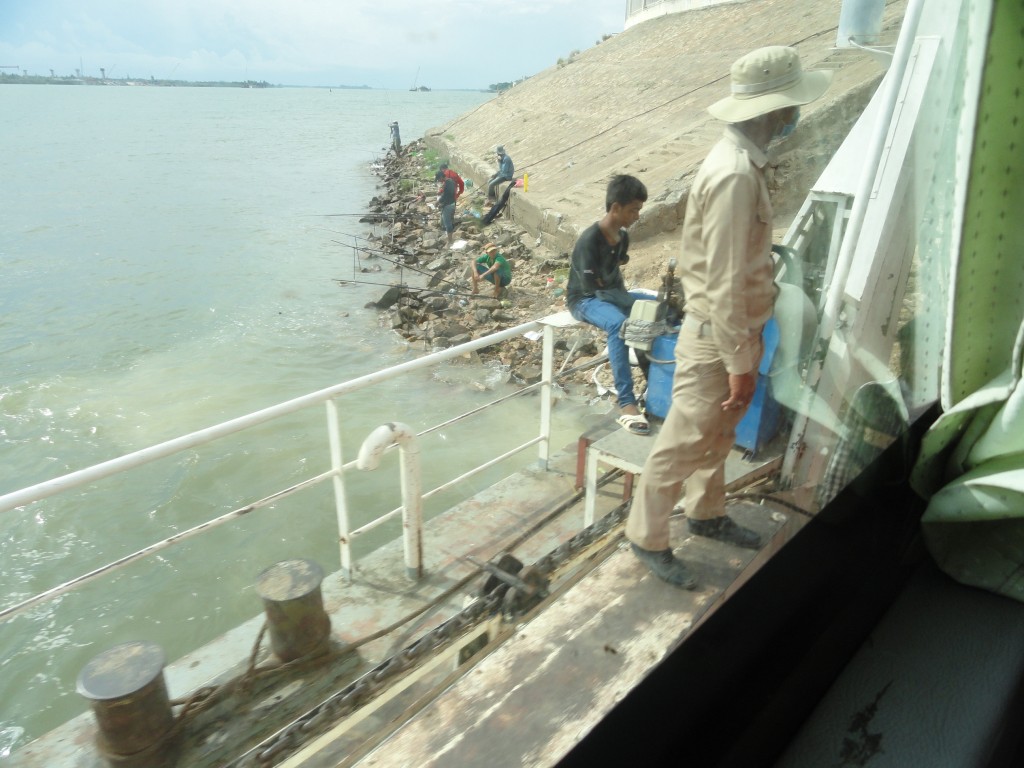