When I decided to make a stop in Ukraine I knew I would have to make the time to visit Chernobyl. As most will know, Chernobyl is the site of the worst nuclear disaster in history when an explosion at the power plant on April 26, 1986 led to a nuclear meltdown. I had been fascinated with visiting the site since stumbling across a blog (which I can’t find but it’s been at least a decade) of a local photographer who spent much of her spare time taking pictures of the surrounding area. They were haunting and interesting and seemed to show what the world would be like if humans simply vanished. In short, it looked like a zombie movie. 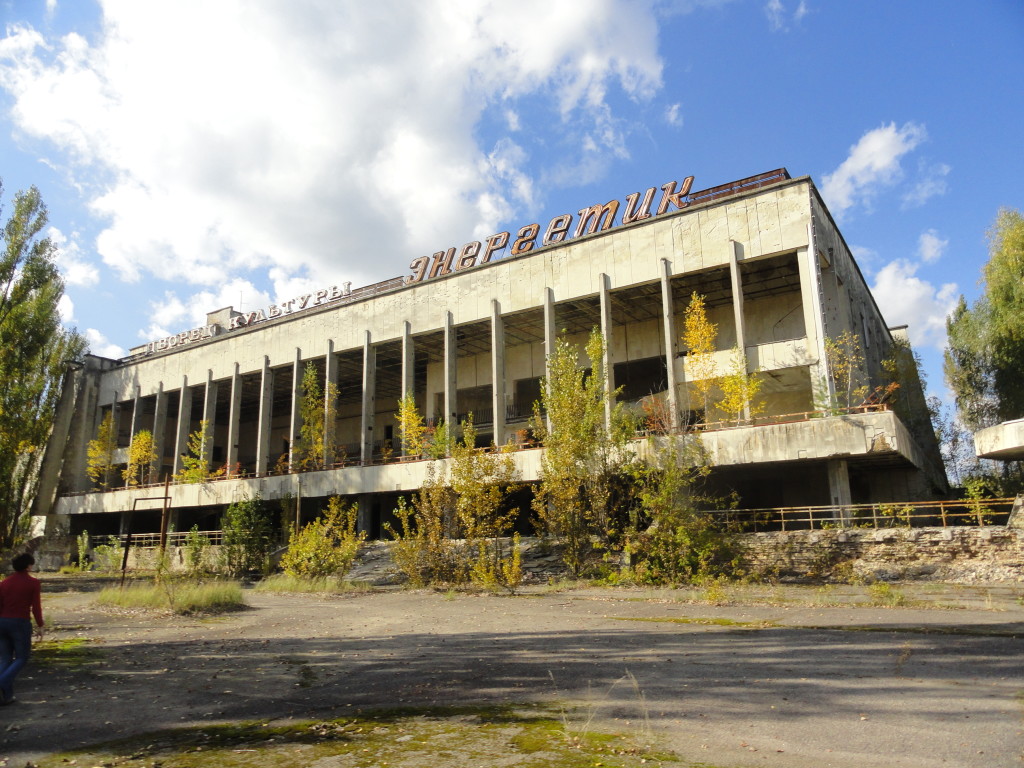 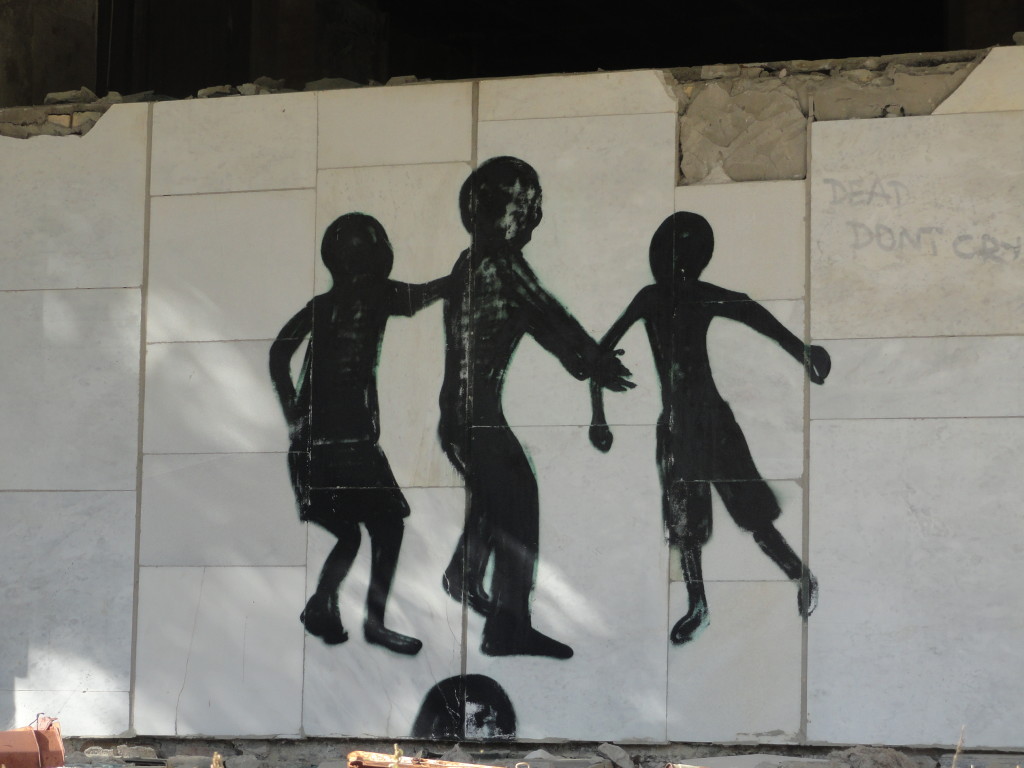 Getting to Chernobyl and its nearby town of Pripyat requires a permit so you can only visit through an organized tour. There are a number of companies out there that do this but my research had shown that Solo East Travel consistently received excellent reviews and was competitively prices ($149) so I booked with them the minute I had confirmed my trip.

I met up with Solo East at Independence square in downtown Kiev and after a brief introduction we were off. My group consisted of about 15 people from Australia, US, France and a number of other nationalities. It takes about 2 hours to reach the exclusion zone from Kiev and in that time a video was shown detailing the disaster and the clean-up efforts. It’s both an amazing story of human heroics and a terrible story of human ignorance and selfishness. The sad part is that the accident was preventable had someone been brave enough to speak truth to power. 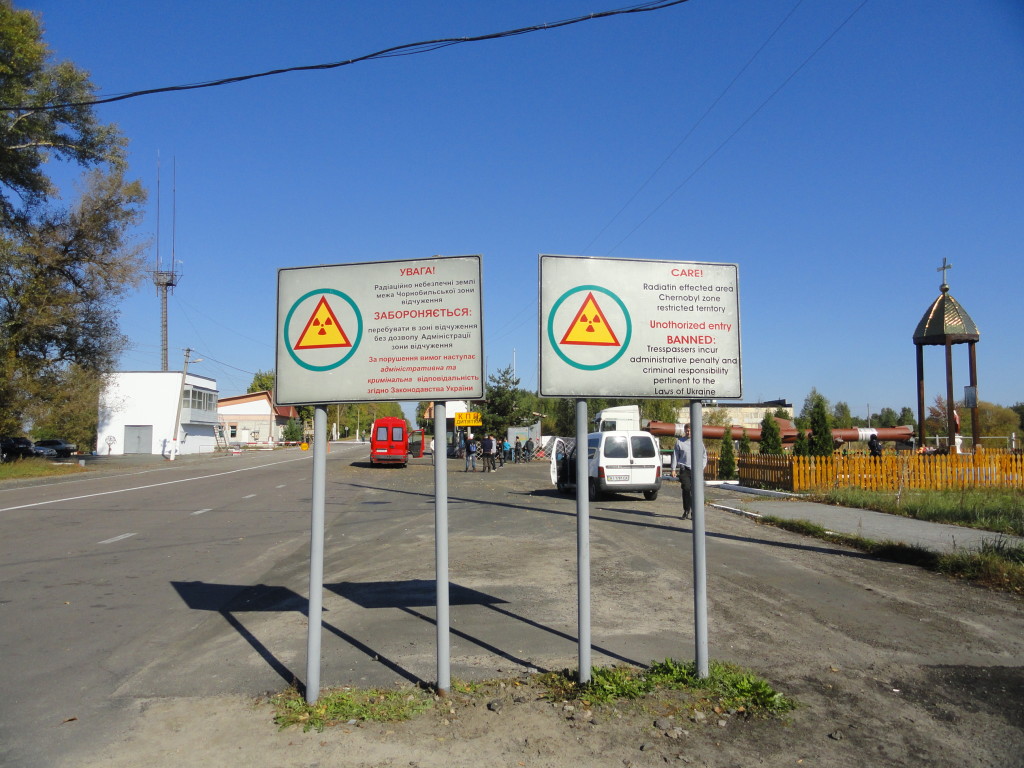 Once at the exclusion zone our papers were examined and off we went. The exclusion zone is a rough circle around the plant where the nuclear fallout landed. Due to the winds that day, the zone extends to the west and south into Ukraine rather than north into Belarus, though they apparently received the heaviest amount of fallout. After a quick stop at a village (still people living and working there) we visited the remains of a school house and the fire hall. Fireman were the first on the scene that evening and we responsible for ensuring that the fire didn’t spread and the catastrophe didn’t get any worse. Unfortunately, they were also all exposed to lethal doses of radiation and were the first casualties of the disaster. Their equipment is still so radioactive today that it cannot be touched. 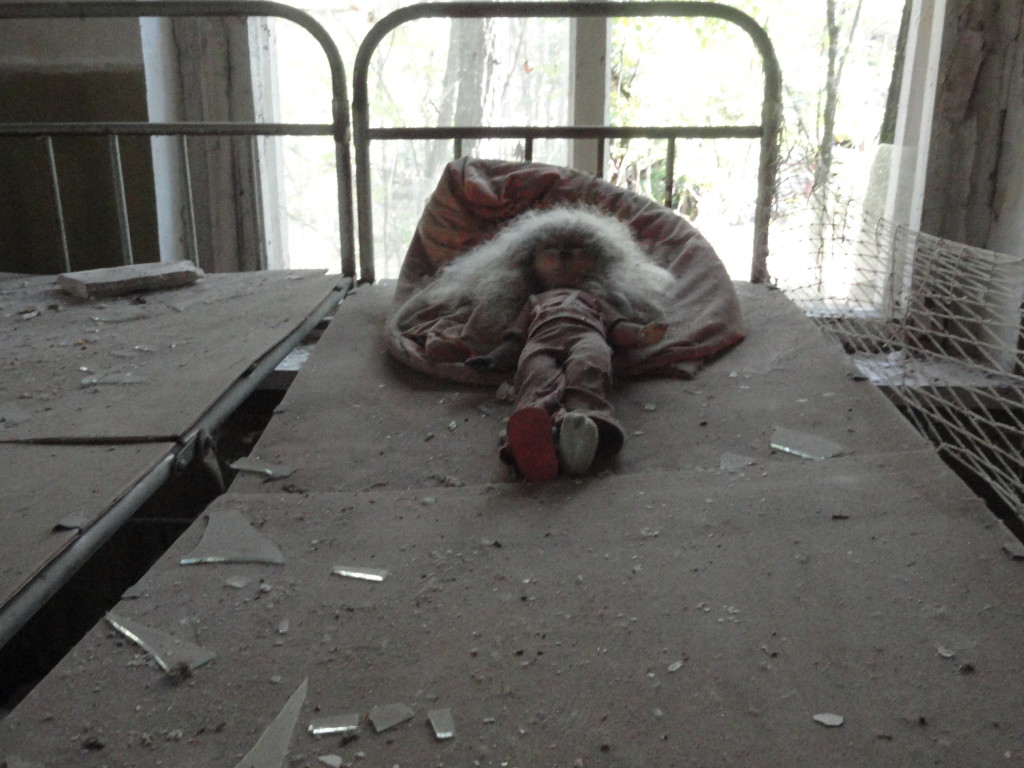 Next up was the plant itself. Amazingly enough, the plant only closed in 2000 and a number of people still work there as part of the decommissioning process. Someone remarked in our tour that they used to work at a nuclear power plant and that the daily radiation dose received by workers almost totalled the entire yearly exposure of a worker at his plat. Scary stuff. Reactor 4, which was the one that exploded and melted down was covered in a concrete and metal sarcophagus that can be seen in these pictures.

As you can see, there is quite a bit of rust as water has worked its way into the sarcophagus. This has left the whole containment area unstable so the international community has chipped in to build a cover for the building that will protect it from the elements as they work towards a better long term solution to the problem. The cover is now in place, though it was just being built when I was there. 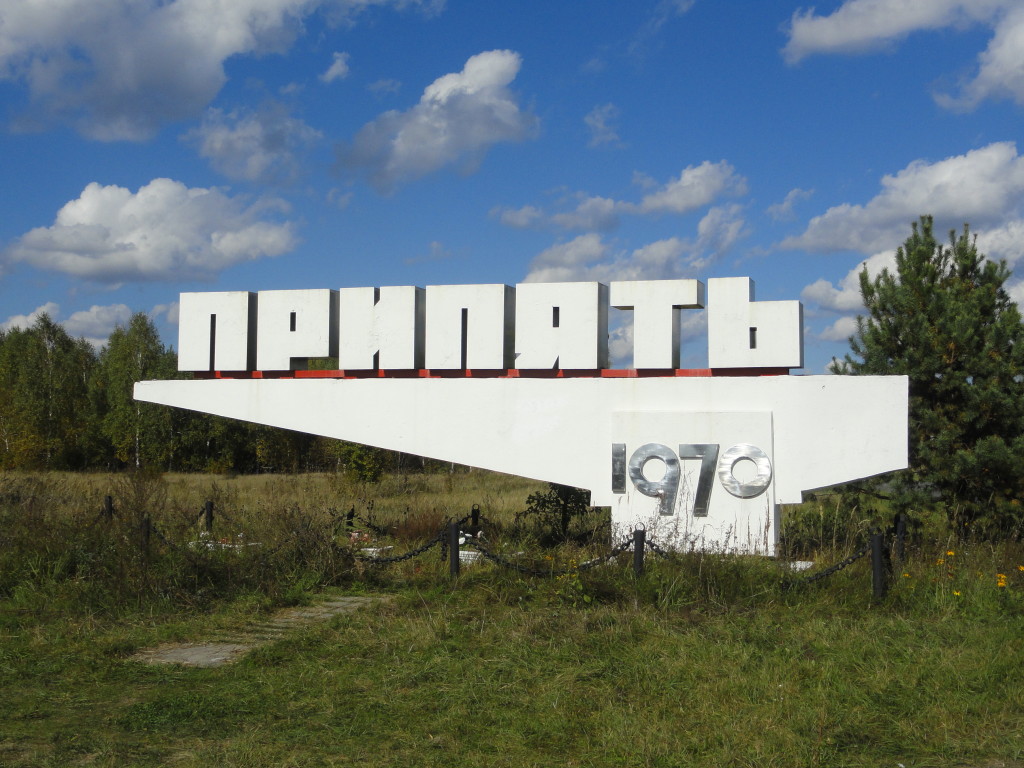 After the power plant we headed to the nearby town of Pripyat. Pripyat was apparently the model Russian city and had been built to showcase the countries growing academic and technological capabilities. It was where the workers and their families along with hundreds of research personnel made their homes. Unfortunately, it was also right in the path of the radiation cloud. It took several days to evacuate the city and its survivors are the ones hardest it by radiation poisoning. It’s now an empty ghost
town where nature has slowly taken over. Our tour first visited the local school: 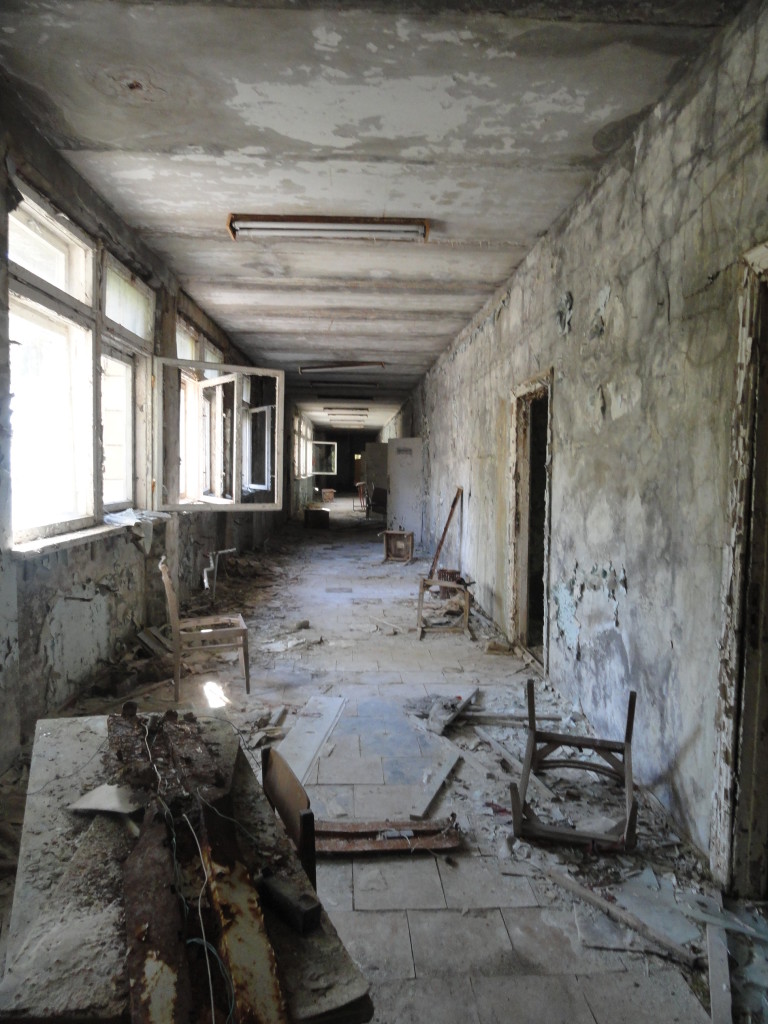 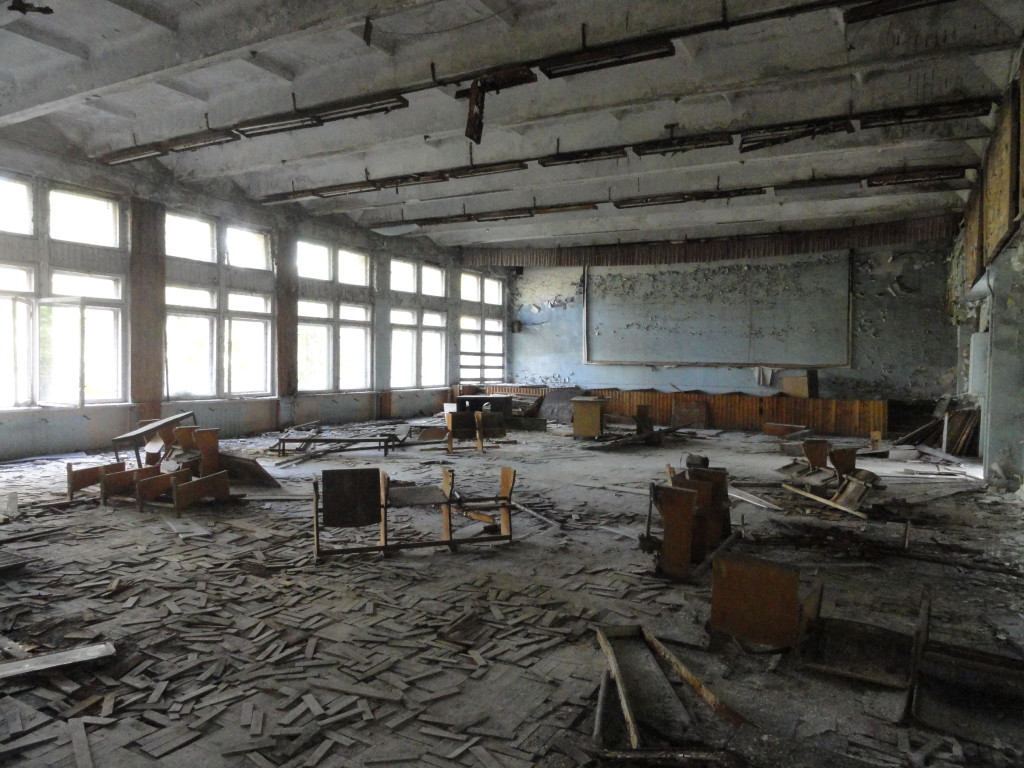 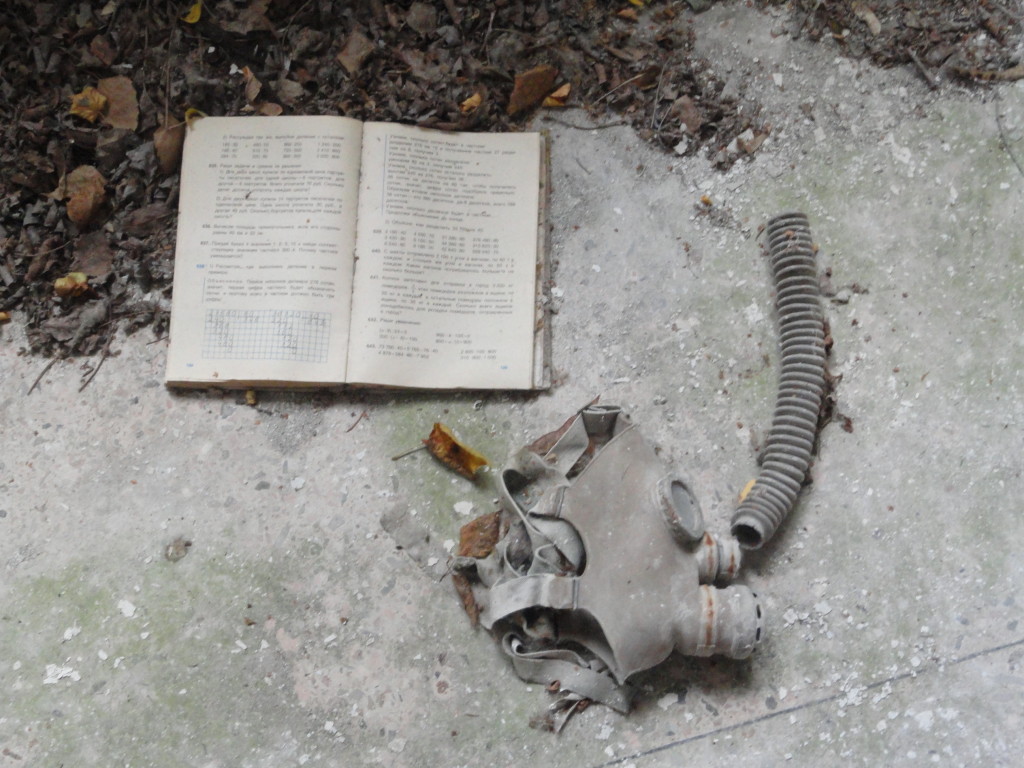 Then the amusement park which was scheduled to open the day after the explosion. To keep children calm during the evacuation, the rides were turned on for the first and only time. 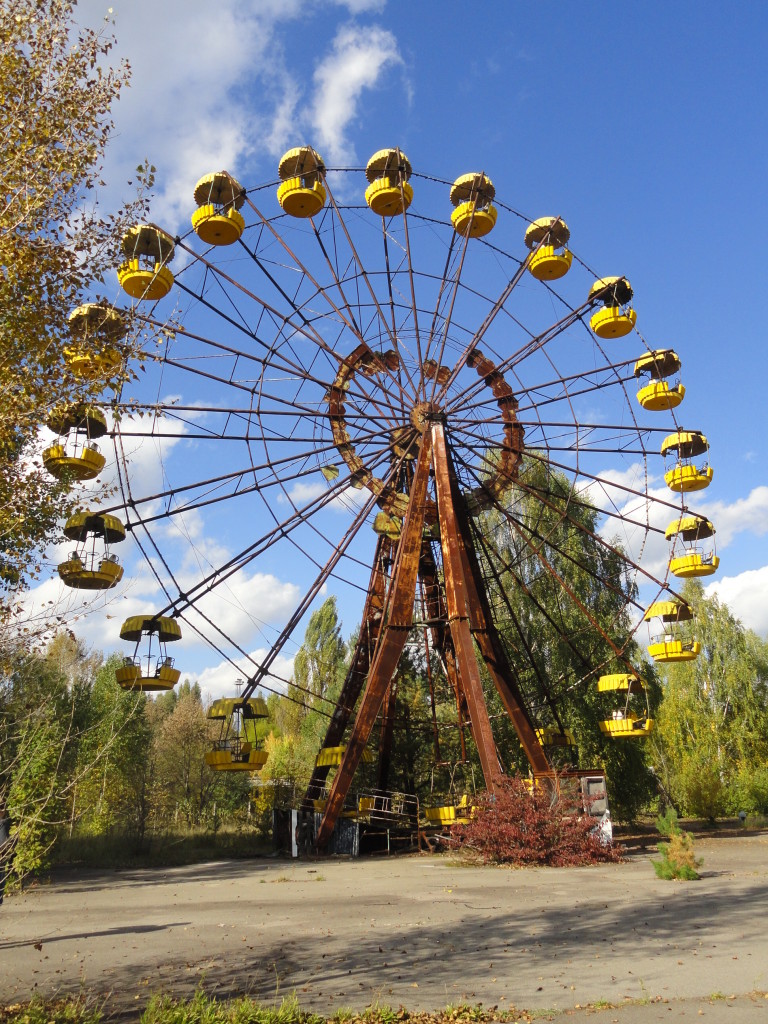 After the tour we were off to the power plant and international project’s mess hall for some food. Eating food beside (the plant is a block away) the world’s worst disaster is a bit of an odd feeling but the food was awesome so it was definitely worth it.  Once we had finished up, we were on our way back to Kiev. Overall the trip was a great experience and well worth the tour cost. I would highly recommend to anyone who is interested in Soviet history or a little adventure. For those looking for more information on the tour, check out Solo East’s website which has a full rundown of the guided tour.